During the General Members Meeting of the 6th of March 2014 it has been decided to proclaim Jelte Zeilstra a Member of Merit. 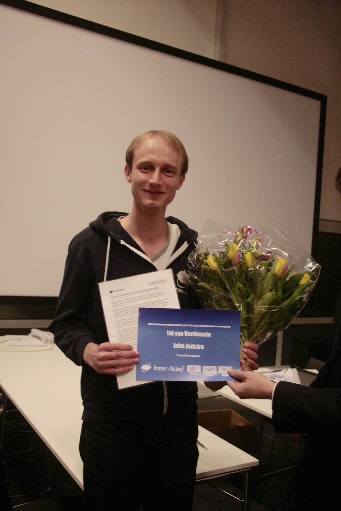 In the academic year 2011/2012 Jelte has embodied the function of treasurer in the 33rd board of I.C.T.S.V. Inter-Actief. During this year he has not only fulfill his role as our treasurer, but also the role of treasurer of Stichting Borrelbeheer Zilverling (SBZ). Before his board year Jelte was already highly involved with Inter-Actief, as member of Kick-IT committee 2010, but also as a member of the symposium committee in 2011 (Immorality). Most notable about Jelte's enthusiasm for our association is his contribution to the IT systems of Inter-Actief. Jelte has been an active member of the system administration commitee for four years now, as well as a member of our website committee for more than three years. Next to a lot of small contributions, he has made a number of very big contributions. After his board year Jelte is still often present at Inter-Actief, and he helps wherever needed within a lot of different aspect of our association. Due to his big presence at Inter-Actief the last years, he has become a source of knowledge for many. When something seems to go wrong, or when advice is needed, Jelte is often there to help or advice, which always brings good to the association.