We would like to inform you about the measures Inter- Actief is taking in accordance with the guidelines set by the UT and RIVM regarding the corona virus (COVID-19).

Today the decision has been made that all educational buildings at the University of Twente will be closed until the 23rd of March. This means that in the upcoming week, the University is not available for studying or project meetings. No educational activities will be held, including examination, lectures (both physical and digital), and tutorial sessions. In accordance with the UT, the Inter-Actief association room will be closed until the 23rd of March. During this time the board will be accessible for questions via e-mail at board@inter-actief.net. We apologize for any inconvenience.

All activities starting from now until the end of March will be cancelled. If you have signed up for any activities you will be automatically signed out and you will not have to worry about paying for these activities. For activities on a later date we are still unsure on whether they will continue. As soon as we know more information regarding this we will communicate this to all our members.

The University has made the decision to halt educational activities for next week. The reason for this is to adapt the education to these new circumstances. Study advisers are still available. Meetings will be held via phone and you can still schedule meetings via the online planner. The University is looking into possible consequences the closure might have for the study progress of our students (e.g. concerning BSA). As of right now, there is no need to worry about these kinds of issues.

More information regarding the measures the UT is taking can be found on the UT corona page here. As soon as new information arises that has impact on our activities and/or members we will send out another email. If you have any questions regarding how Inter-Actief is reacting to these measures and to new information you can contact the board.

If you have any questions feel free to contact us!

Every year several heros rise to form the new board of Inter-Actief. Are you ready?

Like every year, Inter-Actief is searching for a new board that will take on the daily operations and steer the association in the academic year of 2020/2021. With more than 1200 members and 200 volunteers, this is quite the task.

...lead your team effectively and represent the association towards hundreds of students?

...take on the correspondance and reporting for the entire association?

...manage hundreds of thousands of euros?

...motivate a new class for activism and guarantee the continuity of the association?

...maintain more than fifty partnerships with companies and single-handedly finance the association?

...be the voice of our students regarding the quality of our education?

A full-time board year at Inter-Actief is an informative experience. You will encounter various challenges and project your vision on the association. Furthermore, a board year is full of amazing activities and you will learn countless of new people. Will you grab this opportunity?

Send a mail to the board before next Sunday, the 15th of March, in which you indicate your interest. You will then be invited for an interview. Are you unsure whether a board year at Inter-Actief would fit you? Approach one of the board members in the association room, or send an email!

Temporary unavailability of the association room »

During the week of the 23rd of March, the Inter-Actief room will be closed due to the installation of a new airconditioning system.

You will still be able to get tea/coffee/chocolatemilk at the machines on the balcony. In this week, the Inter-Actief board will continue their daily routine in the Scintilla association room, right next to the Inter-Actief room. This means that the board will be available each workday from 09:00 to 16:00.

The week before, the week of the 16th of March, the board of Scintilla will reside in the Inter-Actief room due to construction work in their room. Just like the board of Inter-Actief, the Scintilla board will have priority over the work stations.

Room closed on the 4th of March »

The Inter-Actief room is closed on the 4th of March because of Symposium Nexus in The Grolsch Veste in Enschede.

Starting the 5th of March the room will be open again from 09:00 till 16:00 in accordance with our normal opening hours.

Looking for students to help with Skype Matching! »

We are looking for people who would like to help us with the matching of new international students! Apply through www.ictsv.nl/matching

We are currently looking for people who would like to help us with the matching of new international students. Applicants of the Bachelor’s programmes Technical Computer Science and Business Information Technology will be invited to a matching day in order to get a better understanding of the future study content. Since it is difficult for most international applicants to join the matching days, they will be invited to Skype meetings instead. For these Skype meetings we are searching for TCS and BIT students who are interested in chatting with our international applicants. Both Dutch and international students can apply for this job!

Interested? We would like to invite you to our information session where you will receive further details. The session will take place on Friday the 28th of February, starting at 12:45 in HalB 2A. You can also already apply for the job through www.ictsv.nl/matching

On the 30th of January the study advisers for the bachelor programmes TCS and BIT received the educational bouquet!

Ellen, Bibian, Rianne and (until the start of this academic year) Jan are the study advisors for both of our bachelor programmes. Every week they help students with large and small problems. Especially during the BSA-stress period and in helping solve the issues with starting a completely new studies at the start of the year they are super helpfull! To thank the study advisors for their continuous effort in helping all the students they have all received an educational bouquet! 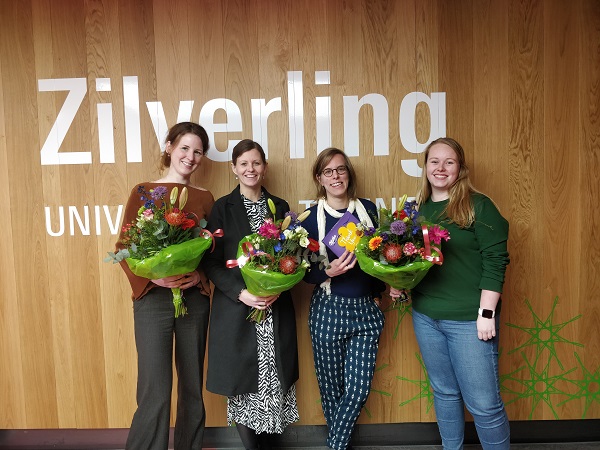 The Kick-IT committee for the Kick-In of 2020 has been formed, together they will organise the faculty Kick-In for Inter-Actief. 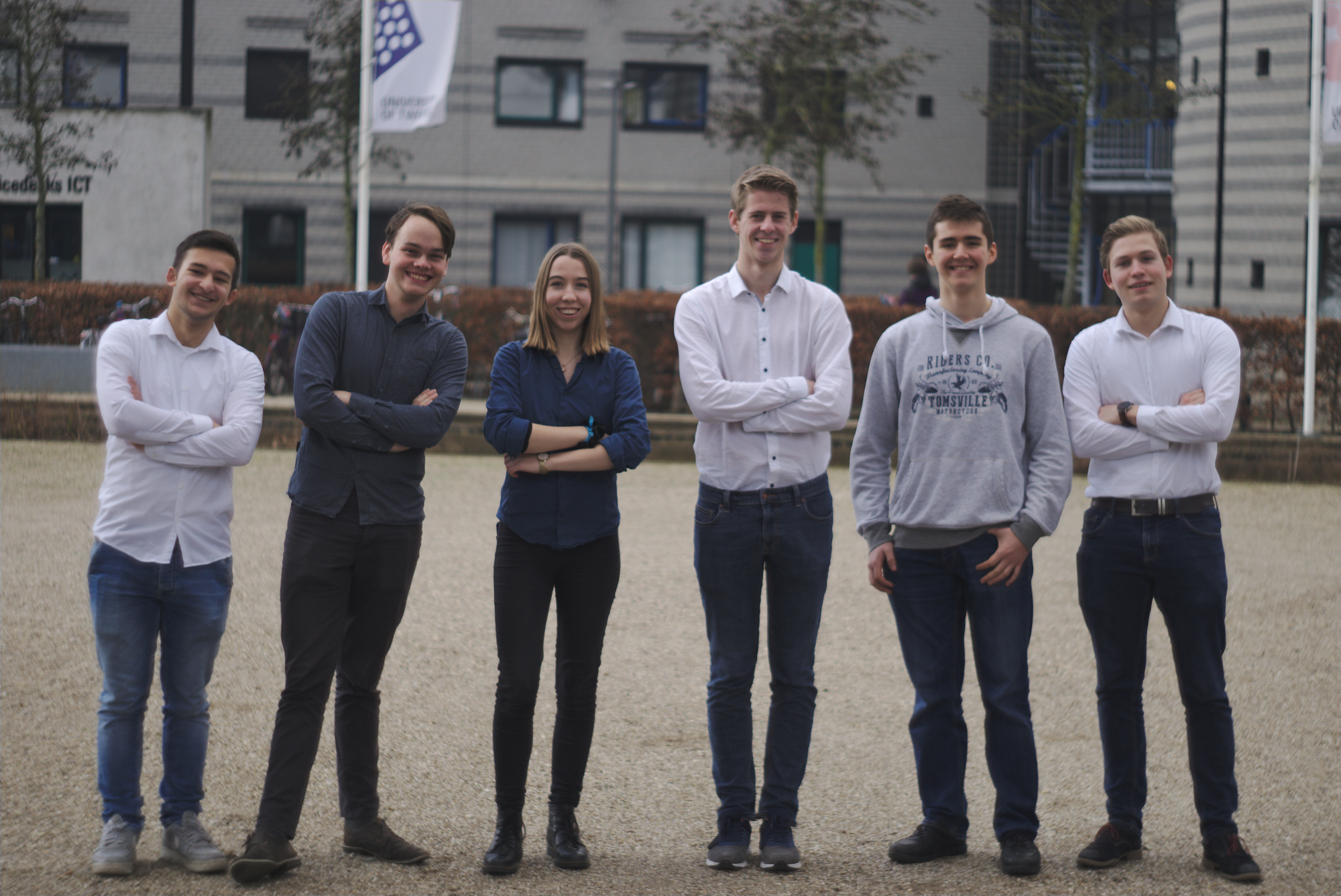 Looking for: Student Assistants for Python in Module 7 »

For Module 7 the module team is looking for students with knowledge of Python to help assist with the lab sessions for Python!

We’re already halfway through the second quartile, so it’s time for the first Educational Update of this academic year! We would like to keep you updated on everything!

Pearls of Computer Science was the module about which we got the most complaints. Due to the large number of participants for the module and the new ‘Houses-system’, some issues arose. Below you will find a list of the issues with their solution:

Starting from this year both TCS and BIT are making use of digital testing more than the previous years. This is done in the form of having tests on Chromebooks in the digital testing environment Remindo. Because we have just started using Remindo, there are still some startup problems. One of these is for example the calculator, which does not allow the use of logarithms, which were needed for pearl tests. When you take a test with Remindo and have issues with the system the team working on Remindo would like to know these issues as to solve these as soon as possible. You can send these issues to the e-assessment team by emailing to e-assessment-ces@utwente.nl!

Multiple issues regarding this Master course were brought to our attention. Officially this course is not run by our programme, but as a large amount of students following the course are Computer Science students the programme director still decided to pick up on this complaint. Evaluations and meetings have been held with the responsible teachers of the course and a plan is being made to make the organization of the course better for the upcoming year. A special OEC evaluation has also been held for this course.

What was noticeable with all the complaints filed during the last weeks was that most of the times, the module coordinator did not know about the issue at all before they were contacted by us. Usually module coordinators are very helpful in solving these issues and often it does not need involvement of Inter-Actief to solve the issue. If contacting the teachers and module coordinator does not work then we can of course help you! If you are unsure on what to do or if you have questions you can always come by the Inter-Actief room!

Next to all the negative points regarding different modules that are usually discussed, we would also like to showcase some positive points! The results of the NSE (Nationale Studenten Enquête) are in and both Technical Computer Science as well as Business Information Technology are scoring above the national average for their fields!

Another awesome thing you can do is to nominate someone for an educational bouquet! You can nominate a teacher, module coordinator, study advisor or any other staff member from our programmes for an educational bouquet if you feel like that person has gone above and beyond for the students! Nominating a person can be done through ictsv.nl/bouquet! Each quartile we will be handing out a bouquet, and the bouquet for last quartile will be handed out soon!

Good luck with studying and if you have any questions feel free to come by the Inter-Actief room or send an email to education@inter-actief.net!

The Inter-Actief room is closed on the 26th of November because of SNiC ResilIT in the Flint in Amersfoort.

Starting the 27th of November the room will be open again from 09:00 till 16:00 in accordance with our normal opening hours.

Come to the Inter-Actief room and decorate your very own shoe!

Sinterklaas has once again returned to our lovely nation! As is tradition, Sinterklaas will be accompanied by his "zwarte pieten" and all children get to set a shoe in their home. In the Inter-Actief room, you can find an arts and crafts corner to make and decorate your personal shoe. Who knows, maybe you will find a small present in your shoe on Sinterklaas morning!

Don't forget to write your name on your shoe.

Due to the Open Days, the Inter-Actief room will be closed on Friday November 15th.

Starting Monday, November 18th, the room will be open again from 9:00 till 16:00 in accordance with our normal opening hours.