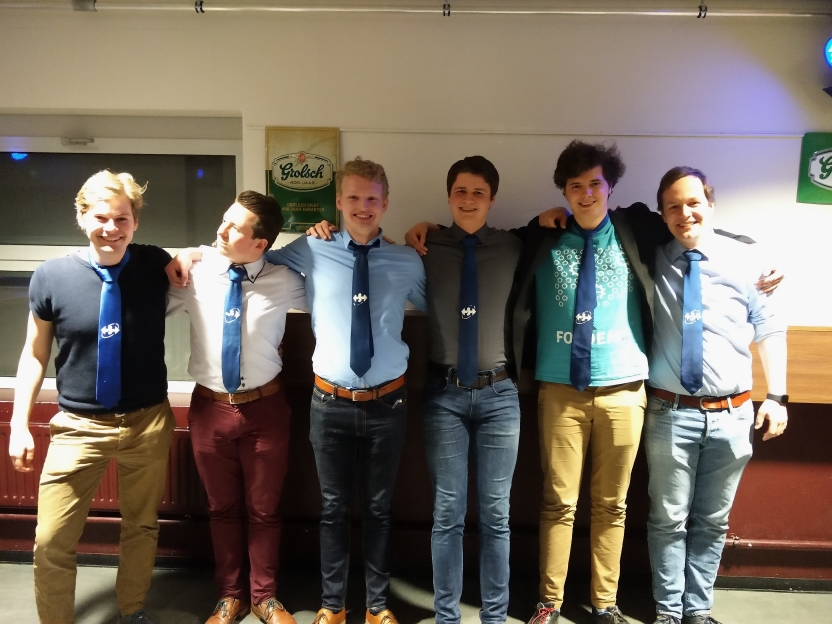 During our last GMM, the cost division for the free coffee on the balcony came up for discussion.

A number of members expressed their concern that the current division with Scintilla is not representative for the amount of coffee that our members actually drink. We were asked to think of a method for keeping track of the coffee consumed to have some facts to substantiate the division.

The board has decided upon the following, starting this Tuesday the 3rd of April:

A new committee has been initiated, called the Cofftee. The committee consists of every active member at Inter-Actief. Every week, unless a volunteer steps forward, one committee member will be chosen at random to ‘count the cups’ for that day. A ledger will be placed near the coffee machines with detailed instructions for keeping track of single cups of coffee or tea as well as cans. To gather some data about potential consumers, we also added a column for every cup of coffee our members get at Abacus.

At the end of the trial, a bronze plaque will be pinned on the coffee machines with the name of the committee member that volunteered the most days.

The first selection has been made, and the lucky winner is: Stephen Geerlings! If you come by the IA room on Tuesday, we will help you get started.

The winners of the IDEA are known! »

At the drink at 27th of March, the winners of the Inter-Actief Decentralized Education Awards are announced.

After the Education Committee received many nominations from both TCS and BIT students, three teachers: Harry Aarts, Doina Bucur and Jair Santanna had the opportunity to present something about passion at the Inter-Actief Decentralized Education Awards lunch lecture of the 19th of March.

We started with Harry, being a mathematician, who couldn’t help himself to tell us something about solving puzzles using mathematics. Moreover, he also opened his personal life to us by showing a few pictures of his children playing with a Rubik's cube (and destroying it as a future mathematician). Then we got Doina who told us a bit about her hobby – logic and data. She taught us how to recognize and track bad science. It is always useful to get to know some mistakes in logical assumptions students often make, isn’t it? Finally, we had Jair who is really passionate about the topic of DDoS attacks in general and booters in specific. Therefore, we had a practical lesson of how easy it is to attack a server and why is it a big problem currently on the Internet.

At the IDEA awards drink on 27th of March, the nominated teachers were called in front of the room in order to receive their prizes: Doina Bucur took the 1st prize, Harry Aarts the 2nd and Jair Santanna the 3rd.

About Doina, her students said that she shows love and enthusiasm for her subject; that she keeps a good balance between theory, practice and research; that her courses are very well organized, including very short grading times; and that she is very approachable. Harry is argued to be the best mathematics teacher who shows great motivation to teach and who explains topics very well and in an easily-understandable way. Jair is called a great guy who is always cheerful when explaining his subject. A student even voluntarily attending one of his lectures.

Moreover, the atmosphere was inspiring and “famous” teachers such Klaas Sikkel, Pieter-Tjerk de Boer and Arend Rensink applauded along with students from TCS and BIT. In the end, all three nominated teachers are challenged to play a game of twister with our Officer of Educational Affairs, Lindsay Kempen. Harry Aarts won the game.

The lunch lecture, as well as the IDEA drink, were a success in showing our gratitude towards the professors, as well as inspiring the students they teach every day.

In the coming weeks the election procedure for the EEMCS faculty council will be held for the sections employees and students. Both sections have 8 positions in the council. The election is for the legislative period September 2018- August 2019 (students) / August 2020 (employees).

Do you want to represent your fellow students in the faculty council? Participate in the elections! Nomination Day is scheduled on Tuesday, April 10 (till 17.00 hrs).

More information, including the schedule, is available on the election’s website. You are welcome to ask questions to Kimberly Hengst, Thijs van Essen and Sander Bakkum (contact details requestable).

With immense regrets we inform you that Mike Webster suddenly passed away this morning, 12th March 2018.

During the weekend Mike became sick and was hospitalized. Mike died at the age of 18.

Filled with enthusiasm Mike started his student life per September at the Business and IT (BIT) programme. His curiosity made him doubt whether BIT was the right programme for him. Per December Mike transferred to the Technische Bedrijfskunde (TBK) programme, which he felt to be a better fit for his interests. He was happy with his choice, was doing well and enjoyed student life with his new made friends. Although he was around at the University only a short time, he knew a lot of people and a lot of people knew him.

Typical for Mike was his positive and cheerful attitude. His kindness and social mind made us smile and made him noticed. Always in for a hand wave or a quick cup of coffee with students and/or lecturers, Mike made a lasting impression.

We feel shocked and sad with the loss of Mike, and we want to offer our condolences to his parents, family, friends, and loved ones.

To remember Mike properly, we would like to make a book full of memories. That is why we ask everyone who knew Mike to share their memories with us. We would like to bundle these memories and offer this book to his parents to show that Mike will be missed enormously, also here at University. These memories can consist of stories, poems, photos, anecdotes or any other personal contribution. Would you please send your contribution to inmemoriammike@gmail.com before the 16th of March?

The Programme Committee (OLC) is searching for a student(s) to make the minutes for the meetings.

BOZ will still be the contactperson and we will take care of compiling the meeting documents. For students it is only about making minutes.

BOZ is looking for students who are interested, and, preferably, who have some experience in making (English) minutes, and are registered as B- or M-Computer Science student. The minutes secretary can not be a member of the OLC.

There are at most 11 meetings every year, always on a Tuesday morning. The language of communication of the meeting is Dutch.

The minutes secretary will receive a compensation, these students will have a UT Flex appointment and can claim expenses for worked hours.

During the lunch lecture (March 19), several nominees will present themselves, after which you can vote for the best teacher.

Who are the nominees? That is for you to decide! Have you had an awesome teacher this year? Nominate him or her before 6th March with the link below:

Are you happy with your study programme? Do certain things need improvement? Don't waste your vote! Inform others and improve your study here.

What is the difference between the NSE and other evaluations?

Why is participation important?

What did we do with previous years’ NSE outcomes?

Fill out the survey and let us know what you think of the UT. Your opinion counts!

For the student-for-a-day programme of some master's degrees we are looking for a few students that would like to take a student that is interested in your study with you.

It concerns the following masters:

Are you interested or do you have any questions? Send an email to j.k.sleurink@student.utwente.nl.

For Discrete structures & efficient algorithms we are looking for 3 students who have sufficient knowledge about Python to assist with the Python practicum.

During the Christmas break, the association room will be closed. We wish you a Merry Christmas and see you next year!

The association room will be opened again from 8 January onwards. Monday afternoon, we will bring out a toast together with the faculty.

Because of floor renovations the balcony will be inaccessible several times this week.

The balcony, and therefore the Inter-Actief room, will be closed at the following moments: * Tuesday from 16:30 until Wednesday morning * Friday from 13:00 until Monday morning As you've probabily gotten used to, we will host our room in the MBasement on Friday afternoon.